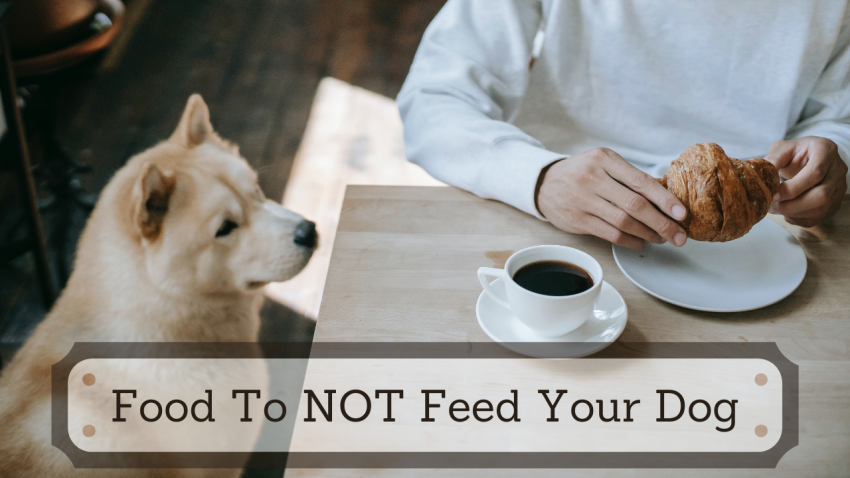 Dog owners who have just obtained their dogs recently may not be sure about the foods they can share with their dogs. Many human foods are tasty and perfectly safe for humans but might not hold for their dogs. These are the human foods that dogs can’t eat, and when the owners share these foods with their dogs, they are in for a nasty shock and a hefty vet bill.

Our first family dog was given to us by my father’s friend, who worked in a factory. What he told us was, “just feed the dog anything that you eat,” and that was what we did. We fed the dog (a Shih Tzu) whatever we ate for our meals, and soon a trip to the vet was arranged because of Allium toxicosis, which is the ingestion of too many onions and garlic. Ever since then, my family became very cautious about what we feed our family dog.

To help all other dog owners out there, I took note of the veterinarian’s words and researched the common foods commonly ingested by family dogs. To ensure that the information shared is correct, I referred to academic journals for every food listed below.

In this article, I will share with you the 6 types of food that you should never feed your dog and the symptoms after ingesting them:

Chocolates are a definite no for any dog as they will get methylxanthine poisoning from ingesting chocolates [1]. The same applies to other cocoa-related products such as coffee.

Chocolate appears first on my list because I believe it is a treat that most humans love, making it all the more dangerous to our dogs.

Sometimes, owners might share their food with their dogs absentmindedly, as simple as tearing off a piece from a chocolate doughnut and feeding it to the dog. Or maybe their dogs know how to rummage through the owners’ bags and manage to find a half-eaten piece of chocolate to wolf down. Accidents, as mentioned, are possible due to the commonality of chocolates in our lives.

However, chocolates contain cocoa, which contains alkaloids such as theobromine. While humans can readily process this compound, dogs process it very slowly. As much, a small amount of chocolate that seemed insignificant can easily lead to poisoning in dogs.

The higher the cacao content, the more alkaloids are present. As such, dark chocolate will be much more lethal to dogs compared to milk and white chocolate.

You might not always catch your dog in the act of eating chocolates, but you can always lookout for these signs.

Early signs of chocolate ingestion include a rise in body temperature, heavy panting, increased heart and respiration rate, and hyperactivity [2]. Such symptoms are the results of caffeine, which is also found in chocolate and is much readily processed by the dog’s system compared to theobromine.

Additional symptoms such as vomiting, diarrhea, or abnormal movements in his limbs may mean that your dog has probably ingested the chocolate for quite some time, and the alkaloids have reached toxic levels.

Grapes and raisins are another food that owners should not feed their dogs.

While the reasons why grapes and raisins are poisonous to dogs are still unknown, there is already a significant amount of evidence that that dogs who eat them might risk facing death. Only 53% of the dogs who ingested grapes and raisins in the study survived (Eubig et al., 2005).

Eubig et al. (2005) reported that all dogs who ingested grapes, raisins, or both vomited within the first 48 hours, with the grapes/raisins still visible in the vomit. During this period, some other possible symptoms are a lack of appetite, lethargy, and diarrhea (grapes/raisins may be observed).

Suppose your dog show signs of decreased urine output, weakness, and signs of ataxia (such as abnormal walking or falling over himself). In that case, your dog is at risk of death and may not recover fully even after treatment is administrated.

The median time from exposure to grapes and raisins to possible death is about 6 days.

Check out this post for more information about other fruits!

When humans consume alcohol, we experience symptoms such as headaches and vomiting, and disorientation. When dogs ingest alcohol, they share the same symptoms – except it takes much less alcohol for them to be intoxicated.

It is more common for dogs to ingest alcohol when found in something sweet, such as cocktails and fruit punches.

Like chocolate, alcoholic drinks with higher alcohol content pose more danger to dogs, and smaller dogs are at higher risk of being intoxicated than bigger dogs.

Early signs of alcohol consumption in dogs are very similar to that of humans – vomiting, motor incoordination, and drinking much more water than usual [3].

Dogs who drank alcohol some time back may show additional symptoms such as drooling, weakness in limbs, seizures, and breathing difficulties.

Overexposure to alcohol or a late treatment may cause your dog’s health to be permanently affected and place him at risk of dying.

Plants in the Allium genus, such as onions, garlic, chives, and leeks, are commonly used in recipes to increase the food’s flavor, making it tastier and yummier. However, they can also cause your dog health problems when consumed by them.

This is the reason why owners should not feed dogs food that they prepare for themselves or bought off a food stall – because what we find flavorful might be a health threat to our beloved dogs.

These plants contain organosulfur compounds that are readily absorbed through the gastrointestinal tract. These compounds cause oxidative damage and prevent the red blood cells from carrying oxygen around the body. The immune system may also sense these red blood cells as dangerous and attempt to attack these cells. Consuming these plants is likely to lead to decreased blood oxygen transportation capacity and impaired delivery of oxygen to the tissues [4].

Check out this post for more information about other vegetables!

The first few symptoms of ingesting Allium species include vomiting, diarrhea, abdominal pain, and appetite loss. However, the most prominent sign is the smell of your dog’s breath due to the strong aromatic scent, especially if onions or garlic are consumed.

It will take a few days after ingestion before symptoms that indicate a loss of red blood cells starts to show. Some examples are a faster-than-usual respiratory rate, difficulty breathing, lethargy, dark-colored urine, and weakness.

If Allium toxicosis is left untreated, it will eventually lead to hemolytic anemia. It means that your dog’s red blood cells are being destroyed by the immune system faster than they can be made, which may lead to eventual death.

Xylitol is not a food; it is a sugar alcohol found in some fruits and vegetables. It is also used as an artificial sweetener and is used in many products such as candies, baked goods, and human toothpaste.

Many owners can remember the food that they should avoid feeding their dogs but are likely to overlook an ingredient that does not appear by itself, making this compound a silent killer at times.

Xylitol affects dogs in two main ways: liver damage and hypoglycemia, a condition that occurs when the blood glucose level dropped too low [5].

Xylitol-induced hypoglycemia can occur from within an hour to several hours after consumption, depending on the item ingested. Some early symptoms are vomiting, lethargy, weakness, convulsions, and ataxia. When left untreated long enough, permanent damage to the nerves may occur.

Macadamia nuts may be healthy for humans, but it is poisonous to dogs. They can be found as nuts or in baked goods such as cakes and cookies.

Researchers have yet to discover why macadamia nuts are toxic to dogs and not other household pets such as cats, only that a small amount is sufficient to cause poisoning, just like grapes and raisins.

You may also want to check out about other nuts in this post.

Symptoms of macadamia nut poisoning can be observed as early as within 12 hours of consumption in most cases [6]. They include weakness, vomiting, fever, tremor, abdominal pain, lameness, and stiffness.

While most dogs can recover fully with treatment, high doses of macadamia nuts coupled with late or no treatment can result in death.

Now That You Know The Dangerous Foods

If you have any of the listed foods in your home, keep them safely locked away to prevent any accident consumption by your dog. Avoid placing them in areas that your dog can reach for or dig from, such as plastic bags and breakable jars.

Generally, if your dog shows common symptoms such as vomiting, abnormal walking, or any signs of weakness, stay on alert mode and closely monitor your dog.

If you suspect your dog has ingested any of the following foods mentioned above, I strongly advise bringing your dog to the vet immediately. Please do not wait for symptoms to appear, as it might be too late then.

Remember, the earlier the treatment, the greater your dog’s chances of surviving and having a full recovery.